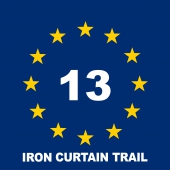 The program is focused on the development of a long – distance cycling trail called the Iron Curtain Trail.

For nearly a half century Europe was divided between East and West Europe. The border extended from the Barents Sea to the Black Sea and it earned the name the Iron Curtain. Today the long – distance cycle route Euro Velo 13 Iron Curtain Trail invites all cyclists with an interest in recent history.In Slovakia the trail stretches along the Slovak – Austrian border for 92 km.

What was the Iron Curtain?

The Iron Curtain was called an impenetrable border, which for 40 years divided Europe into the so-called East and West blocks. It was the boundary between democracy and totalitarianism and consequently between progress and decline. The name Iron Curtain was in no way just symbolic but reflected the impenetrability of this border built out of iron wire fences, electrified wire with other defences.

Iron Curtain disappeared in the late 80ties and early 90ties of the last century, when the world and Europe experienced the fall of the Soviet Union Empire and the return of many countries of the Eastern block to democracy and freedom. Today the wires and iron fences are gone, in many places it is possible to cross from the countries of Europe’s previous East to the countries  of Europe’s previous West any time and any place with check points and barriers.  The Iron Curtain Trail reminds people that crossing this border was once impossible and that many people lost not only their freedom here, but some lost their lives trying to pursue their happiness.

Iron Curtain Trail is long – distance cycling trail, which leads from the Barents Sea in Northern Europe to the Black Sea in Southern Europe. It is 9,500 km long. The trail is not yet fully sign posted, but in Slovakia the signposting is complete. The trail has different character in different countries. It leads across wilderness barren of homes as well as through residential and developed areas, across mountains and also flatlands, along coasts and rivers, from small villages to large cities.

The Iron Curtain Trail in Slovakia

Iron Curtain Trail starts in Slovakia at the border checkpoint Hehenau – Moravský Sv. Ján and continues in closer or further distances from the border through the villages of Malé Leváre, Gajary, Suchohrad, Záhorská Ves, Vysoká pri Morave, Devínska Nová Ves and Devín to Bratislava and from there to Petržalka and the Austrian town of Kittsee. In Slovakia, the trail is more than 87 km long and leads on asphalt routes of varying quality, mostly with minimal or without any traffic. It is marked by standard Slovak system of sign posting (the red cycle route), accompanied by the logo
Euro Velo 13 Iron Curtain Trail.

Ekopolis Foundation and Slovak Cycling Club were the participants of the project, which objective was the implementation and development of Iron Curtain Trail in its middle part, that is in Germany, Austria, Slovakia and Hungary (for more information: www.eurovelo.org). The lead partner of the project was Environmental Partnership Association in Prague and the role of slovak partners was the development of the trail in Slovakia. The project was supported by European Union in the DG Enterprise and it was realized since 1st of January to 31st December 2011. The objective of the project was definitive determination, its exploration and evaluation, finally the elaboration of Action Plan of its development. The activities of Ekopolis Foundation on Iron Curtain Trail are not finished yet with the finalisation of the project, but they continue during next years, when is this attractive trail increased and developed  together with Regional Municipality Office of Bratislava.

In Slovakia the trail is marked in accordance with Norm STN 018028 cycling marking and in accordance with the rules of European Cycling Federation for marking of the trails Euro Velo. The trail is marked by charakter „C“ in red color, placed on adequate objects (trees, columns, buildings etc.) and also with big or small cycling direction indicators with logo and title Euro Velo 13 Iron Curtain Trail.